During Soviet times, the Kremlin discredited the Ukrainian national movement, branding its members as anti-Semites and Nazi collaborators. Along with this, they actively promoted the "great Russian culture" and the "mysterious Russian soul" in the West and recruited supporters from among politicians and public intellectuals.

The collapse of the USSR brought no significant changes. In the West, there was a surge of interest and a certain fascination with Russia, which, in connection with the end of the Cold War, ceased to be perceived as an enemy. And the young Ukrainian state was in no rush to introduce itself to the world — either it had no resources, or it did not realize how important it would prove.

The establishment of the Putin regime in the Russian Federation was accompanied by the cleansing of the media field from opposition media and the creation of a powerful state propaganda machine to work with both domestic and foreign audiences. The Kremlin did not spare any funds for TV channels, news agencies, Internet trolls, bot networks, and agents of various levels of influence. All of them either spread narratives favourable to the Kremlin (about the "coup d'état" of 2014, the "rampant Nazism" in Ukraine, the "primordial Russianness" of Crimea), or distorted reality and twisted facts (like in the situation with the many versions of the MH17 crash) in order to confuse people completely and divert negativity away from Moscow.

But the system failed. Over the past six months, Russia has taken a series of powerful blows and failed to fulfil its tasks in the information war.

The Center for Strategic Communication and Information Security is listing Ukraine’s main wins in the information war against Russia:

The Kremlin failed to convince the world of the validity of its claims to Ukraine. Thanks to the US and the UK, the world was expecting Putin’s attack. Moscow's attempts to construct a casus belli and prove the necessity of "denazification" and "demilitarization" turned out to be extremely clumsy. Russia is perceived as an aggressor.

The closure of Russian state TV channels in the USA and the EU, their blocking on YouTube and Facebook weakened the Russian arsenal of information weapons. The blocking of Russian channels in Ukraine back in 2014, as well as the destruction of Viktor Medvedchuk's media empire in 2021, limited the influence of Russian propaganda on the Ukrainian audience.

The Kremlin failed to demoralize Ukrainians and sow panic at the start of the full-scale invasion. Fake stories about the escape of the government did not achieve their goal. The Ukrainian authorities, alongside Ukrainian and foreign journalists, promptly informed citizens and the whole world about the situation in Ukraine.

The Kremlin was unable to undermine the confidence of Ukrainians in their army by talking about its "total defeat.” The heroic resistance of the military inspired hundreds of thousands of Ukrainians to volunteer as soldiers, making millions believe in our victory.

Despite smear campaigns organized by the Kremlin, President of Ukraine Volodymyr Zelenskyy became one of the most influential politicians in the world, ending up at the top of this year’s Time rating. Zelenskyy’s speeches addressing the parliaments of various countries and appealing to their historic memory reinforced positive attitudes to Ukraine among citizens of those countries, as well as Ukraine’s credibility among political elites.

Photos and videos taken in Ukraine went viral all over the world and made the front pages of leading media outlets.

The cultural front held strong by Ukrainian artists showed how to generate relevant symbols and meanings. The members of the legendary British band Pink Floyd got together for the first time in 28 years to record the Anthem of Sich Archers with Andrii Khlyvniuk. Meanwhile, Russian “culture workers” turned out incapable of real creative work, only engaging in straight-up propaganda.

Russians failed to cover up their horrible war crimes. The information about the crimes in Bucha and Irpin clearly convinced the global community of the need to arm Ukraine.

The information war is also a war of symbols and memes. The succinct but meaningful conversation of Snake Island defenders with the “Russian warship,” the ceramic rooster from Borodianka, the Russian tank hauled by a Ukrainian tractor, and the ability of volunteers to raise money even for an actual satellite became the symbols of Ukrainians’ resilience and will to win. Russia’s participation in this war is associated with stolen toilets and washing machines.

Source: Office of the President of Ukraine

Effective use of Bayraktar, HIMARS, M777 and other samples of foreign weapons by the Armed Forces of Ukraine have effectively become the best advertisement for military companies. Meanwhile, Russian “Iskanders” are associated with the murders of civilians in Saltivka district in Kharkiv.

Ukraine’s successes on the information front were pointed out by British intelligence and covered by leading Western media.

The idea of victory in the information war is not exactly something measurable. The confrontation is ongoing, there is always a balance of victories and losses. In addition to successful defensive and offensive operations, systematic work aimed at strengthening society's resistance to hybrid threats and hostile information and psychological operations is necessary. It is impossible to be completely protected from them. But over the past six months, Ukraine has clearly demonstrated its ability to effectively oppose Russia on all fronts, including the information front. Ukraine demonstrates its agency and speaks to the world in its own voice. 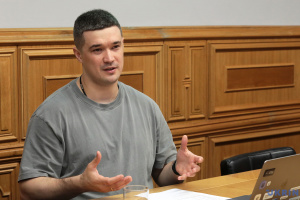